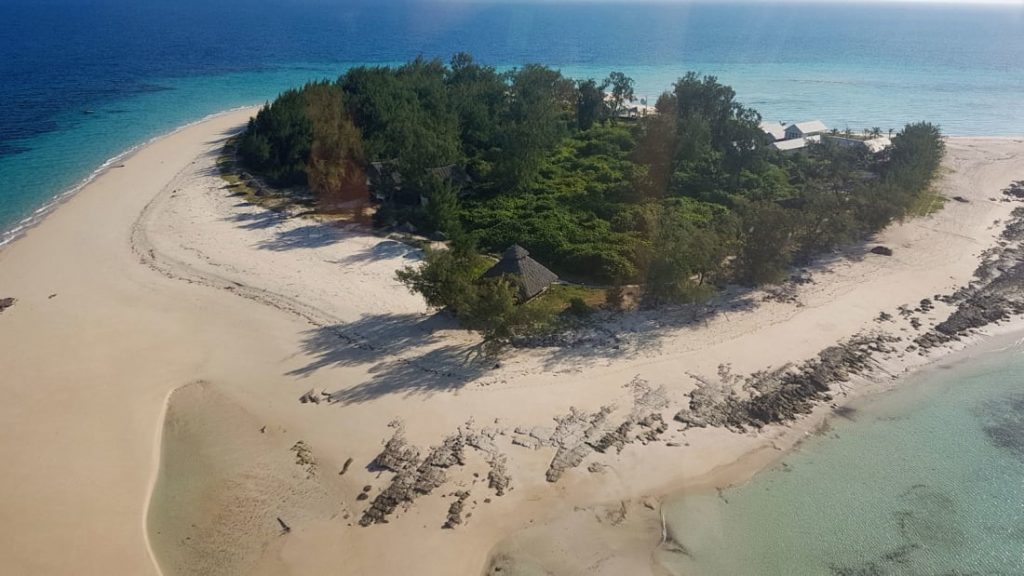 Thanda, also known by its original name Shungu Mbili is, together with the similarly uninhabited islands of Nyororo and Mbarakuni, cupped between Mafia and Tanzania and situated within its own marine park.
Part of the Mafia Island district, it’s owned by Swedish entrepreneurs and philanthropists Dan and Christin Olofsson, who discovered it while embarking on a hunt for a private island retreat in 2006.
They spotted the miniscule island from the air whilst on reconnaissance along the Tanzanian coast, a teardrop with an emerald interior and a salt white hem of beach in aquamarine waters.
Measuring just 250 by 200 meters, it only takes 20 minutes to circumnavigate on foot.
Thanda offers some of the most sumptuous island living you’ll find — a sprawling luxurious beach house, more Martha’s Vineyard than tropic exotic.
The villa, which you hire in entirety, sleeps 10 adults in five huge en suite bedrooms with extra space for kids.
On the other side of the island are a couple of Robinson Crusoe type chalets built off the ground with vast thatch roofs, to accommodate the rest of your enormous party, bringing the island to a nine-bedroom destination.
The sea around Mafia is noted for its diving and Thanda works well as a launch point — Chole Bay is exceptional.
The deeper channels around the islands are home to at least two endangered species; the docile dugong (or sea cow) is thought to find refuge here, and the small islands around the archipelago — including Shungu Mbili — remain popular breeding grounds for turtles.
If you book Thanda, you book the whole island — with all its toys (skis, jet skis, kayaks and boats).
You’ll be secluded from the world as it comes with more than a kilometer of sea buffer. Not even the paparazzi can get close here.
0Shares
Prev